No Aadhar Card No Jobs You Must Know 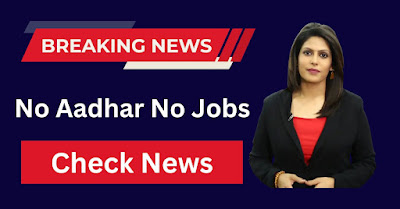 In recent years, numerous railway recruitments were organized, while none of them were free from incidents of malpractices. Several cases were registered for impersonations where another person writes the exam by impersonating as the registered candidate. Also there are several cases of touts who charge lump sum bribes for granting jobs in the railways. So to make this entire recruitment process transparent form all the ill practices, the Indian Railways’ RRB have decided to collect Aadhar card number of all the candidates who will fill up the job application form. This initiative will also help all those job aspirants who are genuinely trying very hard to get recruited in the Indian Railways.

Exclusion from the process of

This initiative to provide Aadhar number in the application form for railway recruitment will not mandatory for those candidates who belong to three states – Assam, J & K and Meghalaya. Instead of Aadhaar card, they must submit any ID card issued by the govt. such as Voted ID, Passport, Driving License, etc. So candidates of other states must submit their Aadhaar number along with the form.
#Breaking News #News

Central University Admission 2023
Central University Of Rajasthan
CU Rajasthan Admit Card 2022
CU Rajasthan Date Sheet 2023
CU Rajasthan Exam Form 2023
CU Rajasthan Hall Ticket 2022
Cookie Consent
We serve cookies on this site to analyze traffic, remember your preferences, and optimize your experience.
More Details
Oops!
It seems there is something wrong with your internet connection. Please connect to the internet and start browsing again.
AdBlock Detected!
We have detected that you are using adblocking plugin in your browser.
The revenue we earn by the advertisements is used to manage this website, we request you to whitelist our website in your adblocking plugin.
Site is Blocked
Sorry! This site is not available in your country.